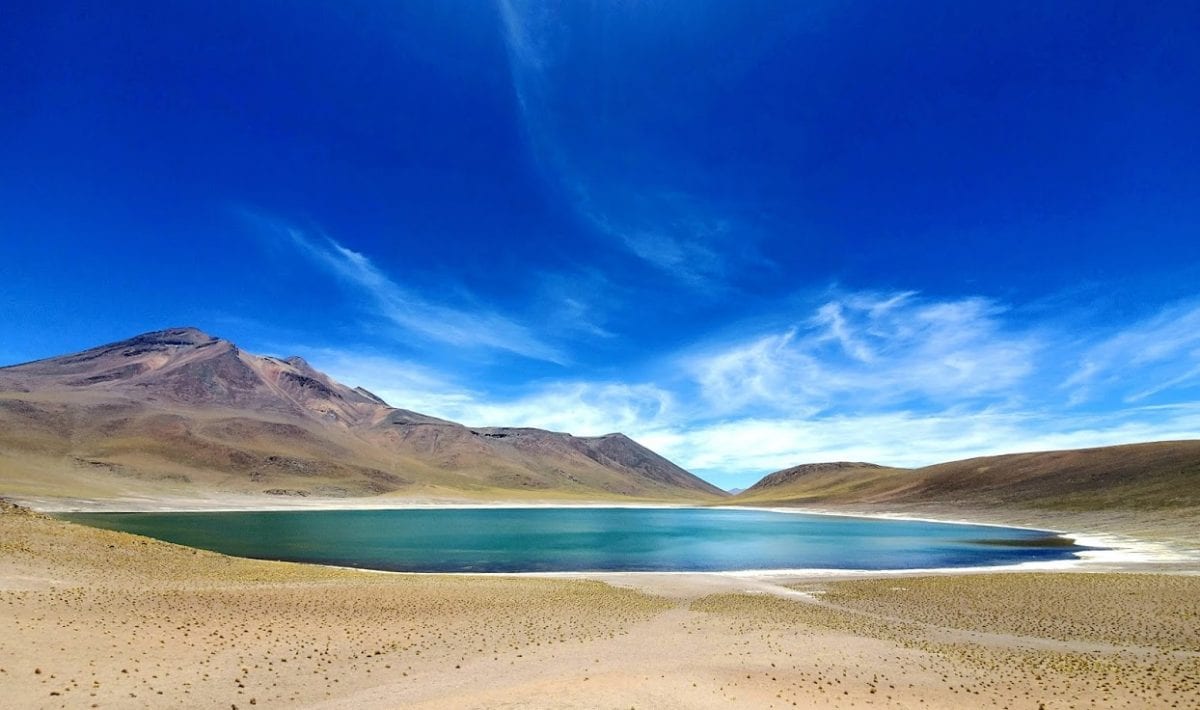 Without the spectacular surrounding landscape and associated tourism, San Pedro de Atacama would not exist. It’s a sandy town built in the middle of the desert for goodness sake. Don’t ask me how they have enough water to survive. Thankfully someone solved that problem and this town has become a popular spot for any trip to Chile. This guide to San Pedro de Atacama will go through the fun things to do, places to eat, where to stay and how to get to this desert town! Be prepared for desert tours, star-filled skies, sand in your boots, and even some delicious pastries!

Upon arrival, we were struck by how much this town looks like it was erected out of the desert itself. Expect sandy streets, adobe buildings and hot midday sun. We did not fall in love with the town itself nor the food nor the prices (life in Chile is a little more expensive than most countries in South America), but you cannot miss visiting the Moon Valley. It’s spectacular. We recommend getting in and getting out of San Pedro. 2 to 3 full days is all you need to get the most out of this adventurous desert town!

Fun Things To Do in San Pedro de Atacama

You’re here for the desert tours. Outside of excursions, there is not much to do in the town itself. Whenever possible, we prefer to go the self guided tour route. However in San Pedro de Atacama that is often not an option. The nature is spectacular, yet far away. So we did what we could by bike and hopped in a tour van for the rest!

Some of our favorite adventures of our entire trip were when we got on two wheels and started pedaling (Paracas, Peru and Calafate, Argentina). The Valle de la Luna in San Pedro de Atacama was no exception. The scenery is supposed to look like, you guessed it, the surface of the moon. And, spoiler alert, it does.

Rent a bike from anywhere in town (~3000 Chilean Pesos, ~$4USD for a halfday) and pedal down the smooth, mainly car-free road surrounded by what can only be described as desert mountains to the Moon Valley! Stop by the ranger station and pay your entrance fee (~3000 Chilean Pesos, ~$4USD per person) and then pedal onward. The road does get a little hilly and bumpy so unless you’re training for the Tour de France, you’ll end up walking your bike up the at least one large hill. Per Maps.Me, park/lock your bike and explore the viewpoint Duna Mayor 1. Take your time. This is the reason you’re here. Be sure to check out, the black, moving but stationary optical illusion sand, which we named the “Nickabree” after the two travelers who discovered it.

From here you have the option to go a couple miles further but we stopped. Just kidding, of course we didn’t stop, I’m traveling with Michelle! We pedaled our hot, tired butts all the way to the end of the Moon Valley road and saw a couple extra rock formations. To us, they were nothing special (there are rock formations everywhere!) and we would recommend turning around and not visiting them.

Aim to start biking by 10AM and expect your roundtrip to take roughly 3-4 hours. Be sure to bring plenty of water – remember you’re biking in the middle of a desert! Most organized bus tours go to the Moon Valley around sunset, so an added benefit of biking, in addition to cost savings and some much needed exercise, is there won’t be tons of people there with you.

Due to the lack of light and general lack of civilization, San Pedro de Atacama is a popular place to go stargazing. You will learn a little about telescopes and the night sky but don’t expect to learn much. You can expect though to spend most of your time staring up at more stars than you’ve ever seen in your life somewhere in the middle of nowhere Chile!

Stargazing tours happen every night provided the sky is clear and you’re not within 3-4 days of a full moon. It’s hard to adjust travel plans by up to a week based on the lunar cycle. If not convenience for your travel schedule, you’ll survive if you miss this tour.

The Red Rocks Tour is an all day excursion to many of the natural wonders around San Pedro de Atacama. It is one of, if not the most, popular tour in San Pedro de Atacama. Expect to see spectacularly blue high altitude lakes and plenty of flamingos. Also be ready to spend a lot of time in the car. Be prepared with podcasts and/or audiobooks.

Though many people rave around this tour, we felt too much time was spent in the car. Maybe we went on the wrong “Red Rocks” tour, maybe we’d see our fair share of desert lake recently in our travels, who knows? But we didn’t love it. If this is your one chance see desert lakes, go for it. If you just came from or are planning to do the Uyuni Salt Flat Tour, we think you can skip it.

Although we didn’t do it, we heard mixed reviewed from other travelers about whether it was worth it. The pick up time is very early 4:30AM-5AM. Some said it was cold and uneventful and they were exhausted the whole time. Others were blown away by the experience. If this is your one chance in life to see some geysers go for it. If not, get some extra rest.

How to Book Tours

Seemingly every other building in town is or doubles as a tour agency, making it impossible to know if you’re getting a good deal. Besides, it’s hard to tell if the person you’re talking to works for the tour company or is a third party seller (They’ll always tell you that they work for the tour company). Though it’s impossible to know for sure, a good way to feel like you’re not getting totally ripped off is to ask for the prices at your hostel and then go to town and ask for the prices at a tour agency. Then go with whichever is cheaper. At the end of the day, it’s all the same tour.

We did our Red Rocks Tour and Star Gazing Tour with the same company and paid 52,000 Chilean Pesos per person (~$70USD). At tour company offices, prices are negotiable. Always ask for a lower price than advertised.

Where To Eat in San Pedro de Atacama

Who would have thought that the middle of the Chilean desert was the perfect place for a legit French bakery?? Well, someone did and you have to go. It was one of the best bakeries we visited our entire trip! Everything I saw looked delicious and I can personally vouch for the croissant!

Outside of this delightful surprise, there is nothing else that you must eat in San Pedro de Atacama. There is a popular empanada truck but unfortunately it’s not on GoogleMaps. It’s somewhere near Backpacker San Pedro Hostel. Ask around and maybe you’ll get lucky! Though the service wasn’t stellar (we waited quite a long time for an empanada…), the portion sizes were great and the flavor was on point.

How To Get To San Pedro de Atacama

San Pedro de Atacama is most often accessed by bus from Uyuni, Bolivia as an ending or starting point for the Uyuni Salt Flats tour. Another way to get there is via flight from Santiago. Domestic flights in Chile are cheap (think like $10-20USD one way). From the airport, you will need to take a 12,000 Chilean Peso per person (~$15USD) shuttle. Public buses are not an option, which was annoying. If you love hours/days on the road, can you also get to San Pedro de Atacama from Arequipa, Peru or Santiago via bus (wouldn’t recommend).

Where to Stay in San Pedro de Atacama

Unless you’re looking for desert luxury, the most recommended place in the area is called Backpackers San Pedro Hostel. Honestly, we didn’t love it. Most excursions start early in the morning, yet quiet house didn’t start until midnight. It is not the cleanest place we’ve ever stayed (yes, we know we were in the middle of desert) and the kitchen was so-so. Unfortunately, we couldn’t tell you a better option. For the 2-3 nights you plan to stay in San Pedro de Atacama, it will get the job done.

Where To Go Next

Taking the Salt Flats tour between Uyuni, Bolivia and San Pedro de Atacama is one of the most popular adventures in a South America trip. The 3 day tour takes you though the world’s largest salt flat, to colorful high altitude lakes and other natural wonders. Although a trip highlight for many, we weren’t able to do the excursion because of political unrest in Bolivia at the time we were planning to do it. Based of pictures and everything we heard from other travelers, it is a must do though!

You’re just a short flight away from the Chilean capital of Santiago. Here you will find museum, parks, fancy restaurants and delicious sandwiches. Santiago usually has the cheapest international flights of anywhere in South America. From here, the world is your oyster.

A popular next stop is Salta, Argentina. Salta is the largest city in Northwest Argentina, but outside of having a beautiful square, there is not much to do. We don’t recommend staying more than 1-2 days there. However, due to it’s size, it is a transportation hub for the region. You will need go to Salta to visit the nearby Cafayate wine region and colorful mountains of Tilcara!

Salta is accessed by a 12 hour day-time only bus. We had heard that this bus only ran on certain days and was particularly hard to book. As of our visit in December 2019, this bus runs everyday of the week. We were unable to book it online so we stopped by the bus station and purchased it in person (~35,000 Chilean Pesos, $45USD per person). We do recommend buying your ticket a couple days in advance because our bus ended up being full. You’ll need to factor a walk to the bus station into your schedule as it is a solid 20 minute walk from the center of town.

There you have it, our Things To Do in San Pedro de Atacama post. From us to you, happy adventuring!

All costs as current as of December 2019.

How Much Does It Cost to Backpack Chile?