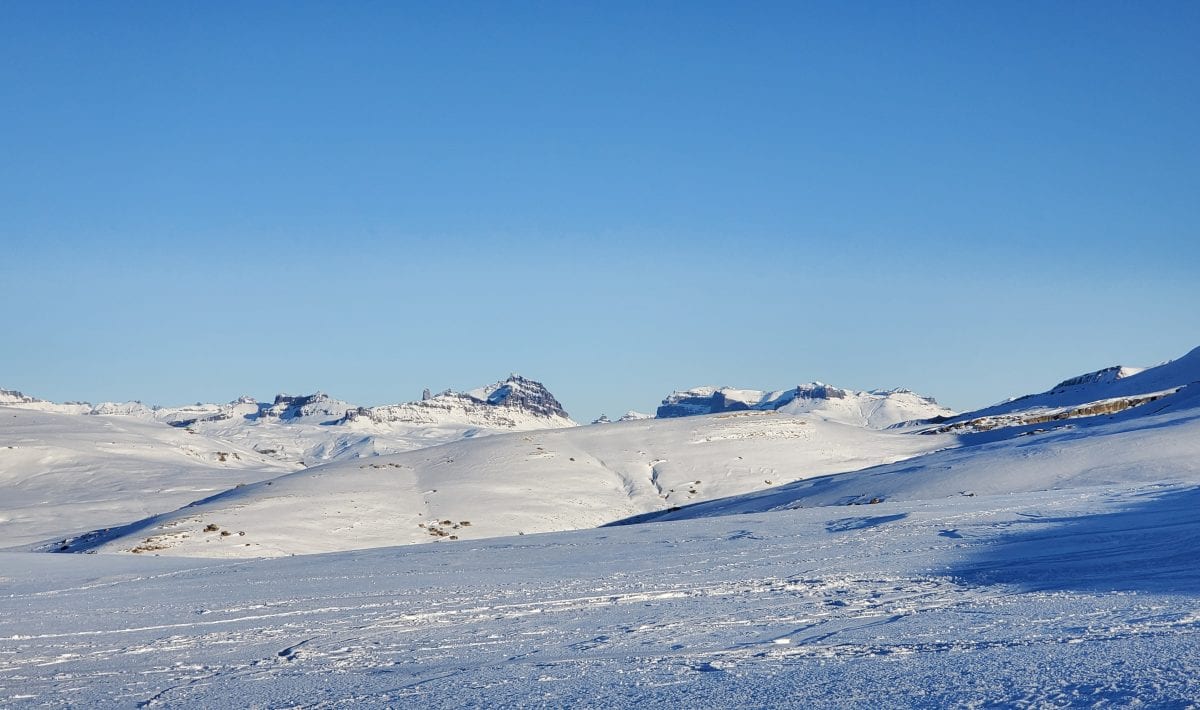 Winters in Calafate are tricky. It doesn’t always snow and the bay isn’t always frozen. Additionally, it can get muddy after a heavy snow, and the arid ground isn’t built for dealing with the runoff very well. But at least it’s not windy! It makes the cold a lot more manageable.

Taking advantage of your time there means adapting to the changing weather and going in with an open mind! The best things in life are… unexpected.

Hoya del Chingue is an outdoor sports center that serves as a motorcross track during most of the year and offers incredible views of the surrounding mountain ranges. In the winter, you can also ski when the conditions are right. Chances of this are low, but the hike is incredible.

This is also the start of a much longer hike to Cerro Moyano that requires a full day and an early start.

Note: Many of the hikes in El Calafate can NOT be found on Maps.me. (Isn’t that exciting?!?) It means you’re a trendsetter. It also means that you may be challenged in your path-finding abilities. Honestly, all the hikes we went on (Moyano was NOT one of them) had very easy-to-follow paths. No map was needed, just a general sense of the direction of your destination.

Ice Skate on the Bay

Ice skating on the bay is another activity only available in the winter, and when the conditions are right. You can rent skates and sleds at Club Andino for a very reasonable price. Bring cash & an ID.

You can also play hockey on the bay when the conditions are right. Look for a hockey rink, usually in front of the Club Andino or Hotel Xelena. Locals frequently play around 3-4pm, so just head out there and be friendly! You’ll need to rent your own skates from Club Andino, but locals will usually lend you their sticks! Club Andino also rents hockey sticks if you’re interested!

Walk Out to Punta Soberana

Even if ice skating isn’t your thing, you can still enjoy walking out on the frozen bay. You can even make it all the way to Punta Soberana! When the bay is frozen, the flamingos that frequent the waters may be found on the other side of Punta Soberana, in the very UNfrozen parts of Lago Argentino.

El Arroyo is the river that runs through the east part of town. It’s a beautiful hike in the summer or winter, as long as it’s not too muddy. You can start on the east or west side of the river (though the west side is likely easier) and just follow the paths. It’s hard to get lost and there are very many paths. Go with an open mind, snacks, and a desire to enjoy the stunning Patagonian landscape views.

Pato is Argentina’s national sport. It’s like quidditch but on a horse, and with no bludgers coming after you and only one hoop.

You can watch (or play!) pato at Cabalgata en Patagonia on Sunday afternoons. The group meets at 3pm, but they don’t start playing until 3:45-4pm. To play, get in touch via WhatsApp or their website at least 24hrs in advance.

Go on a Horseback Ride

Cabalgata en Patagonia offers horseback ride excursions in the winter! Get in touch via WhatsApp or their website and ask about their schedule and availability.

While you can rent sleds to use on the frozen bay at Club Andino, here I’m referring to sledding down a hill. Snow and these hills make for a great sledding experience. You might/WILL DEFINITELY have to get creative about your sled. We started with cardboard, then moved up to a sheet of plastic, shovel, dogfood bag, and finally a tube. It was an adventure.

“Do you wanna build a snowmannn? Come on, let’s go and playyyy!”

You know the tune. Now that it’s stuck in your head, get excited. We built our best snowman ever after some snow in El Calafate. Now grab your waterproof gloves and a carrot and enjoy!

Skiing is an option in El Calafate *under the right conditions. That’s why I leave this at the end. Hoya del Chingue offers skiing and snowboarding. Reach out to them on Facebook to ask about conditions!

This is an always-and-forever activity as sunsets out on the bay are spectacular. Make sure to get close to the water as it allows you to appreciate the way the color changes across the sky reflect across the bay and lake. It’s gorgeous!

There are plenty of things to do in El Calafate during the winter. Make sure to check out the myriad of other posts inspired by our stay in El Calafate for more ideas:

That’s all for now. We hope you enjoy your stay in El Calafate and do let us know what you think in the comments!

From us to you, happy adventuring!