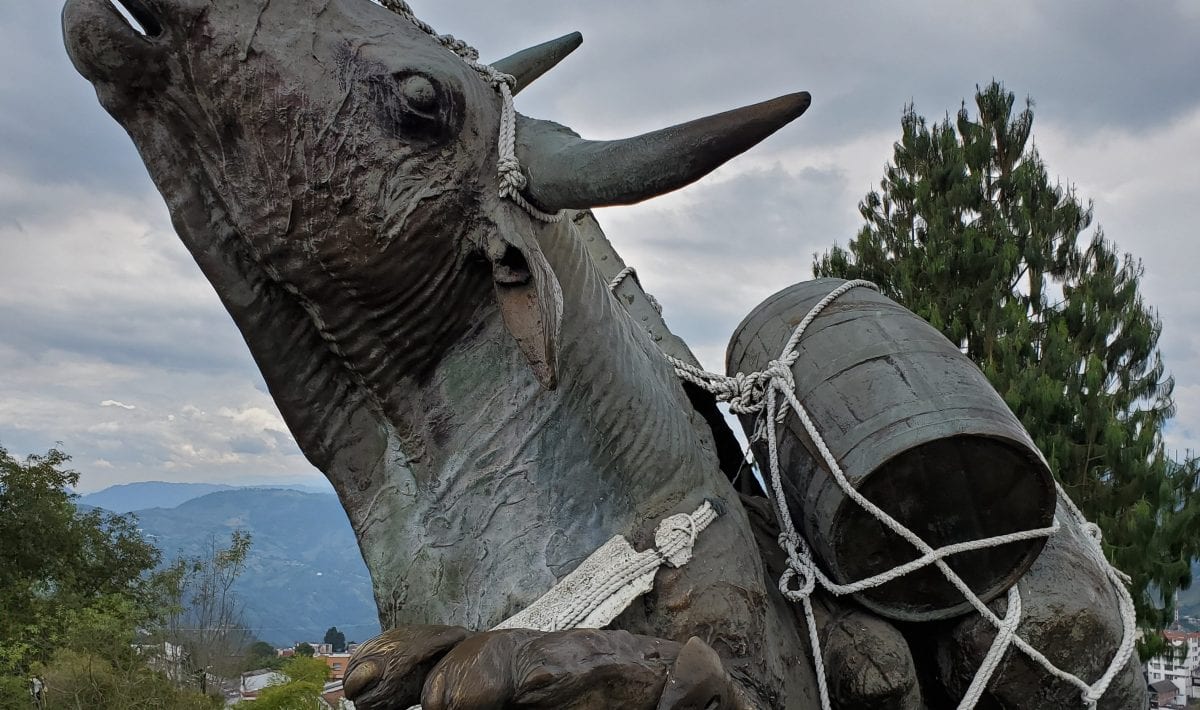 This post is a deep dive on the Los Colonizadores statue in Manizales, Colombia! For an introduction to this post, check out our post – 48 Hours in Manizales.

The first half of the sculpture is titled Ecstacy, and it’s about the arrival of the agrarians. It shows the traditional method of that families migrated. A young girl of the family, usually a virgin, would go in front, protecting the family from evil. The most experienced and adroit agrarian would be beside her. The matron of the family is on horseback. The horse isn’t a pegasus, but the blankets of her baby that are taken by the wind when she lifts her baby. Women were married very young during this time and usually bore over 20 children. Behind the mother is a small child, also traveling by horseback, and the stronghold of the household is pulling along the load.

I didn’t get a picture of the complete second half, titled Agony, but it represents the difficulty of travel and the challenge of building this city on a hill. Oxen were traditionally used to carry load. If you notice the tail of this ox, it’s a serpent, and it’s front foot is a puma’s paw, representing the dangers of traveling through the jungle. Facing either of these animals was potentially fatal to an ox, so the colonizers traveled with dogs to alert them of dangers.

Next follows a mule, which is transforming into a fish. The fish is a salmon or trout, which are grown in this region, and which swim upstream, signifying how the colonizers chose the difficult path, swimming upstream, to build this city on a hill. Behind the mule-fish, a mule on the highest point across the ox’s shoulders represents how the colonizers chose the highest point for the city.

The groups traditionally traveled with oxen connected by two beams carrying a load in between. This is the method that the colonizers brought all of their supplies to Manizales to build the city.

There you have it, a deep dive into the Los Colonizadores statue in Manizales! From us to you, happy adventuring!

Should I Go To Salento or Filandia?
Things To Do in Manizales: Your 48 Hour Itinerary
Santa Rosa de Cabal, Colombia: More Than Just Hot Springs!
Cali Colombia: Things To Do in the Salsa Capital of the World!
Jerico Colombia: Discover One of Colombia's Hidden Gems
Colombia's Dark Years: A complex history told with a cup of fresh coffee
Colombia Itinerary: 1, 2, and 4 Week Guides To Your Next Great Adventure