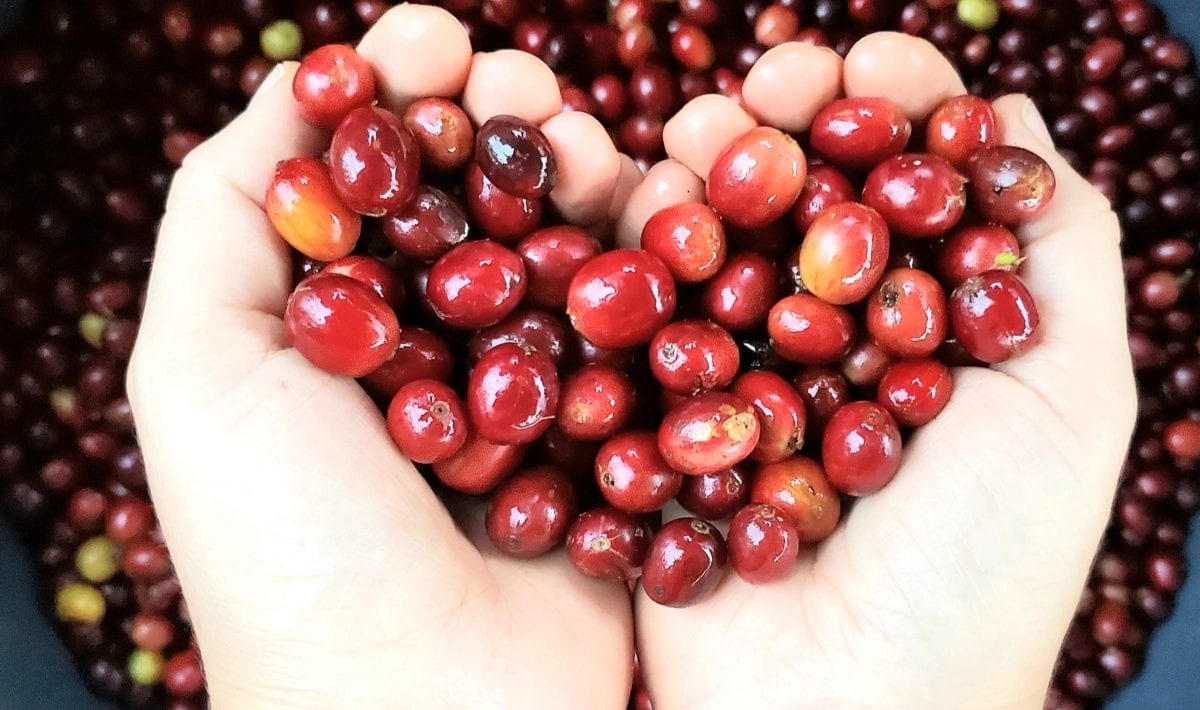 Deep in the heart of Colombia, there is a story that unravels the complex history of Colombia’s dark years. It explains the rival stances of the civil war’s multiple parties and paints a picture of how this war over money and power impacted all Colombians, particularly farmers — all delivered with a fresh cup of coffee.

Colombia’s history is complex. I’ve been in Colombia for a month and have taken at least three tours in the large metropolises of Bogota and Medellin. On these tours, a native guide tries to relay the events of Colombia’s dark years – those in which ordinary people were caught in a battle among various factions that included the FARC, the government and narcotrafficking groups. Those that led to the death of millions of Colombians, innocent and not, including the death of Pablo Escobar, Colombia’s most infamous narco-terrorist. I visited Museo Casa de la Memoria, a museum in Medellin dedicated to preserving the testimonies of the victims of this civil war; a museum that attempts to present an unbiased and complete picture of what it was like to live through those years when entire school buses went missing, loved ones were killed by drive-by shootings, and whole communities were displaced. Still, something about the history didn’t click. Maybe because I was fortune enough to be born in the U.S. at a time of relative peace and cooperation, what I read and learned seemed almost otherworldly to me. I didn’t understand it, until I met a coffee farmer in the little-known town of Buenavista.

Short of opening a history book, my understanding of Colombia’s dark period remained obscured by terms like la FARC, paramilitares, and guerrillas, and occasionally thrown in, M-19, AUC, & Lara Bonilla. Trust me, I love asking questions, and yet my understanding of the era of the eighties and nineties was clouded. So I was surprised to find that a cup of fresh coffee, as close to the source as one could get, was all that I needed to clarify any cloudiness.

Don Leo lives in Buenavista, in the department of Quindío, the heart of Colombia’s coffee region. Now in his 70s, he has lived in Colombia all his life and has always been a rural farmer, a campesino. Today, he owns Finca La Alsacia and employs 10-15 workers depending on the season. At heart, he is a laborer and his wish when buying the plot of land that became his coffee farm was to go back to his roots and to treat laborers with the dignity and respect he wishes he’d received. Everyone who works for Don Leo has breakfast, lunch and dinner provided. It’s the same meal that Don Leo and his wife eat; it’s the same meal that visiting tourists eat; and it’s the same meal that volunteers (like me) eat. Not only does Finca La Alsacia practice social equity with their workers, but their farming practices also reflect native and natural methods. Their farm is a beautiful mess of 1200+ native fruit and non-fruit-bearing trees. Among the coffee plants, their main product, he grows bananas, plantains, guava, avocado, yucca, and other citric fruits. On a visit to the farm, tourists will surely learn about coffee and the coffee-making process, but even more interesting to me is the story of Don Leo himself.

Don Leo grew up in a small town with 16 siblings, dirt poor, but happy. Farmers weren’t treated well and were paid poorly, but there was work. In 1974, Colombia was the world’s 2nd largest producer of coffee, topped only by Brazil. Then in June 1975, a two-day frost damaged two-thirds of the Brazilian coffee crop, causing a shortage that resulted in a price spike to twice its former level from 1975 to 1977. In Don Leo’s words, the Colombian government, wanting to take advantage of the coffee price spike, decided to increase the costs of all commodities — gas, milk, food. According to economists, the coffee-fueled goldmine caused inflation to grow rampant, reaching 35% in 1977. Meanwhile, the price of labor remained depressed. (Urban wages even contracted 10% between 1974-1977.)

In short, campesinos were dirt poor and social tensions rose. Many turned to nomadic labor, moving where farms were prospering. This is how Don Leo, under the promise of rich coffee farms in the northern region of Colombia, was deceived into illegal farming. Many laborers scraped up the money to pay for transportation and made their way to La Sierra Nevada de Santa Marta only to find that instead of coffee, the farms were harvesting marijuana. Dirt poor from years of low pay and having spent all they could to get there, they were forced to accept work harvesting marijuana. Over time, the owners of the farms, realizing the even higher profits that could be gained from harvesting coca, transitioned to this now notorious crop.

Don Leo’s is a story of how a simple farmer of high ethics and morals could transition from farmhand to cocaine chemist. Upon weeks of working harvesting coca leaves, Don Leo overheard talk about a laboratory and chemist. Curious to see what a laboratory looked like and expecting it to be clean with high-tech equipment, Don Leo was stunned to see a dingy, dirty mess of a kitchen. For days, he’d watch as the chemist mixed ingredients, using gasoline, ammonia, and bicarbonate to create a substance, and each day, he’d notice the chemist’s hands growing unsteady. Don Leo knew by watching the chemist’s feverish symptoms that he was plagued by malaria and would need to be replaced. While first unwilling to train Don Leo, the chemist eventually accepted him as his successor.

Don Leo worked as a cocaine chemist, and his attention to detail, perhaps in an effort to prove himself given his lack of formal schooling, brought him recognition as the lead chemist in the area. In two months’ time, he received his first paycheck, a whopping 180,000 COP, over 20X what he’d received as a laborer. That same night, his conscious made him restless and gave him the courage to escape. Knowing full well the dangers of the jungle through which he would wander or worse, how we would be slaughtered by the narcotraficantes for getting caught, he walked for four days through dense jungle until reaching a small town where he found relief. From there, he made his way to his wife and son and with the money he’d earned, they opened up a small shop in the quietest town they could find.

Don Leo’s shop grew and he became a successful businessman with multiple properties and two cars (a real success story for a farmhand!), but his dream was always to own a farm. And so in 2009, he bought some land in Buenavista and opened Finca La Alsacia with the intention to build a farm that practiced the social justice and sustainability values he believed in. Don Leo’s coffee tours go by the name Caficultur, combining the concepts of coffee, culture, and tourism, and take visitors from the town plaza where his coffee is served down a winding road to his farm.

It’s on that journey that Don Leo recounts what it was like for campesinos during Colombia’s dark years. How during the coffee boom of the late 1970s and the social injustices harbored against laborers, some campesinos formed groups of bandits and later guerrilla groups to defend their rights and properties. How the FARC rose as a promise to offer a unified front to defend the rights of campesinos. How many campesinos joined only to be disillusioned by the FARC’s violent and inhumane practices. How they wanted to escape, but couldn’t, and those that did, came back to warn the others. How in many rural areas, the only alternative to joining the FARC was to move to a nearby city. How the government, entangled in corruption and blinded by dollar signs, supported clandestine armed forces, the paramilitares, to carry out the ruthless acts that governments aren’t sanctioned to do. How Colombians, especially campesinos, were left vulnerable by a poor economy on one side and armed, ruthless groups on the other. How all of these factors combined led to the displacement of millions of campesinos from their rural lands to newfound slums in the big cities. How eventually, this led to more drug-trafficking. And how Colombia is pressing ahead to the bright future ahead of it.

Deep in the heart of Colombia’s coffee region, there is a man called Don Leo whose story tells it all.

If you are planning on visiting Colombia’s coffee region, make sure to check out our post on Buenavista! Don Leo’s farm has tours every day at 10am and 2pm. To schedule your visit, visit his site here, and let them know in advance if you need translation!

The Very Best Coffee Shops in Colombia
Santa Rosa de Cabal, Colombia: More Than Just Hot Springs!
Medellin: Things To Do in Colombia's Culinary and Cultural Capital!
Colombia Itinerary: 1, 2, and 4 Week Guides To Your Next Great Adventure
Things To Do in Manizales: Your 48 Hour Itinerary
Should I Go To Salento or Filandia?
Cartagena Travel Tips - What They DON'T Tell You