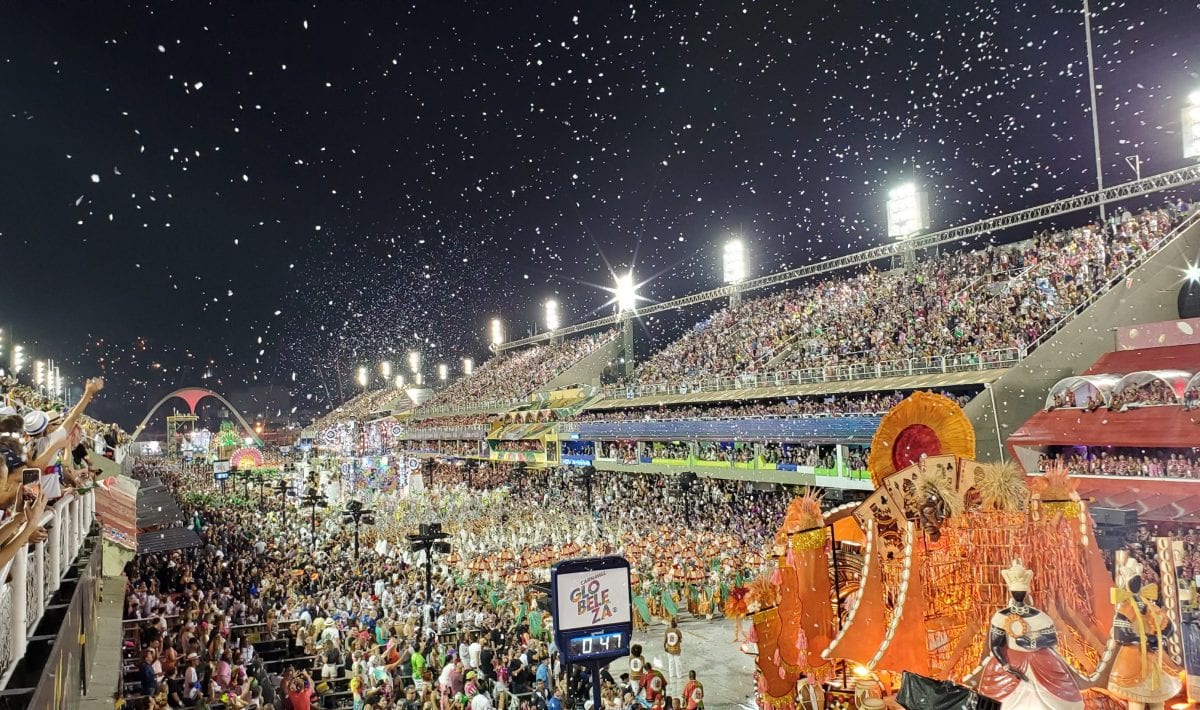 Carnival in Rio coincides with similar celebrations worldwide like Mardi Gras in New Orleans and Carnivals celebrated throughout South America & Europe. While Carnival technically starts on the Friday before Ash Wednesday and ends on Ash Wednesday, festivities span weeks (or MONTHS) and some of the biggest are AFTER Ash Wednesday. If you only plan to experience to Carnival in Rio once, you might as well be there for the main events! But make sure to keep reading!

There are many ways to celebrate Carnival in Rio; the most popular is attending a bloco, which is a block party. Blocos are usually open-air, informal gatherings centered around plazas or occupying massive avenues. While many are free, there are also exclusive blocos with a wide range of extravagance. Your best bet for choosing which to go to are to ask your hostel. Before you dish out the big bucks though, check out a free bloco to see if you want to pay for an upgraded experience.

In our experience, what you get at an exclusive bloco is usually space, security* and a better or more popular band. Neither of us being avid listeners of Brazilian music, a popular band isn’t much of a draw, since we’re not going to know the music anyway. It is fun to see people enjoying it, especially when it’s a VERY popular band – everyone is singing along and dancing!

Honestly, we found blocos to be overwhelming due to the number of people and only ended up stopping by one in Rio (we went to many in Salvador right before!). Regardless, we were blown away by the energy and happiness of the Brazilian people, and it made us a little jealous that we weren’t born Brazilian!

You should always seek to limit the valuable belongings that you carry on you during Carnival in Rio. Regardless of event, free or paid, a good rule of thumb is to think that whatever you bring something will get stolen. Free events are especially packed with people, but even if you’re going to an exclusive event you can still get pick-pocketed on the way there.

What is the Sambodromo?

The Sambadromo is a parade where the 13 top samba schools in Rio de Janeiro compete to see who is the best. It has massive floats, scantily-clad women, and all the colorful costumes that make Carnival in Rio de Janeiro a worldwide phenomenon! And it only happens during Carnival.

This competition means everything to the samba schools and is a yearlong effort. From picking a theme and creating a storyboard, to designing and then building the floats and costumes for the parade. It all culminates on the Sunday and Monday of Carnival.

To help put the scale of this event into perspective, each parade includes 2000-3000 people in the parade. And there are 13 parades. Winning means money for the school and bragging rights for the next year. If you come in last, you are relegated to a lower league and must re-qualify for next year’s Sambodromo.

When is the Sambodromo?

OUR PRO TIP: If you’re on a budget, go to the Champions Parade on the Saturday following Ash Wednesday. The tickets are about half the cost as Sunday and Monday. The winning school and all rankings will have been announced, and their performance may not be a surprise if you watch their performances beforehand, but you’ll be dazzled anyway!

Buy your Sambodromo tickets in advance. Like tickets to popular concerts or sporting events, the original tickets sell out quickly, meaning you may need to buy your tickets from a re-seller. We’ve heard of 3rd parties selling fake tickets, so we were wary to buy from them. We used RioCarnival.net and had no issues. (If you use them, you do have to pick up your tickets in-person in Copacabana here or use their courier service for an extra fee.)

Each night is an all night event and lasts until the next morning! We recommend buying tickets for either Sunday or Monday night; though maybe not both since it’s long & can get repetitive.

Where Should You Sit?

There is a VIP section at ground level and a non-VIP section in the bleachers. While the VIP area gets you eye-level with the dancers, the bleachers are more-or-less eye-level with the floats and allow you to take in the parade in its entirety. Also, there is no assigned seating. We first sat in the middle and, after a couple parades, worked our way up to the front row.

Finally, towards the end of the night (and I mean the following morning), the stands tend to empty out and you can just slide into the VIP-section.

How Do You Get There?

The best way to get there is by taking the subway. Regardless of where you’re staying (we stayed in the Botafogo neighborhood and would recommend it), hop on the subway and get off at the Centro station. From there, exit the station and veer right along the avenue. You should see people walking towards the Sambodromo as well as street vendors selling popcorn, hotdogs, chips, etc.

The signage to get to the stands is very poor. You’ll likely have to ask people, “Onde e o sambodromo?” but you’ll get there. Give yourself an extra 30min from the time you arrive to Centro to your seat.

The subway runs all night during Carnival so you’ll take the same way back.

What Can You Bring?

Surprisingly, you can bring food and water into the arena. We brought in two sandwiches and a 1.5 liter water bottle with no issues.

Unlike blocos, where people dress up in everything ranging from superhero costumes to nearly nothing, most attendees are not dressed up. There will be some people in Carnival-esque costumes, but you will not be out of place in regular clothes.

How Long Does It Take?

The Sambadromo is not a short event. On Sunday, there are 7 parades; on Monday, there are 6 parades; and each parade takes about 1 hour. The first parade starts at roughly 9:15PM. With setup and cleaning time in between each parade, on Sunday the last parade did not finish until 7AM!!! 7AM!! We were not prepared to pull an all-nighter and left after the fifth parade around 4AM. Be sure to prioritize sleep the night before in order to make it through the whole thing!

How Much Does It Cost?

The cost of your tickets depends heavily on which section you choose. In 2020, the tickets were USD$75+.

What to Watch for in Rio’s Sambodromo

There is a lot going on during each parade, but they all have some common elements. Here are some tips on what to watch:

Each parade picks a theme and tells a story through the floats and costumes. Good luck figuring out exactly what it is though – Michelle and I could never agree! Before entering the grandstands, make sure to get a Program! It explains each school’s theme!

Each school has a king and queen of the parade. They hold the school’s flag and dance together all the way down the parade route. They are not allowed to put the flag down, so they spin and spin all the way down. I don’t know how they don’t get dizzy!

Percussion Section, Queen of the Drums, & The Band

Each parade has a massive drum section that bangs out the beat through the entire parade. The drum section is lead by a scantily clad woman who holds the coveted position of Queen of the Drums. This is usually what people picture when they think of Carnival in Rio, but the number of people in head-to-toe costumes far outnumber the Queen of the Drums.

The schools do not have a specific anthem that they play every year. Instead, samba orchestras compete and a new song is picked by their followers each year. This song is sung on repeat throughout the hour-long parade by a live band walking with the drum section.

We were amazed by the creativity of the costumes! Be sure to check out every group that passes by you. We saw people dressed as monkeys, squid, gold miners, and fish – just to name a few!

After watching the incredible parade, you will have your opinion of who you thought did well, but how will you know if you were right?!

There are many judges (~40) stationed throughout the parade route that are judging each school on one specific criteria such as costumes, floats, continuity, etc. Each judge’s scores are announced starting around 6PM on Ash Wednesday and the winner is announced shortly afterward. If you’re still in Rio, it worth stopping by a bar where they are announcing the scores to be a part of the excitement!

Want to Learn More About the Sambodromo?

You can learn more about the Sambodromo and tour one of the samba schools in La Cuidad do Samba (“Samba City”), a square block in Rio that consists of warehouses used by the 13 competing samba schools to build their floats and costumes for the Sambodromo.

You should not just show up and expect to find a tour (like we did…). Only one of the samba schools, Rio Grande, offers tours to visitors. The tours are Monday-Saturday at 11AM and 4PM. They recommend booking online, however we just showed up and they were able to accommodate us. They have tours in English and in Portuguese where they explain the history of Carnival, provide a tour of the warehouse where you can see them working on floats and costumes, and even let you try on costumes from past parades! The cost of the tour was R$80 or ~$20 USD per person.

What else can you do in Rio during Carnival?

Many businesses are shut down on the Monday and Tuesday of Carnival, though many restaurants remained open. We were advised not to attempt to visit any tourist sites in Rio during Carnival, as this is when the city is most packed with tourists. While we heeded this advice, we met others who did.

We were lucky to visit Rio twice, once before Carnival and once during, and we’re putting together a post on our favorite things to do in Rio and will link it here soon!

Final Tips for the Sambodromo

Getting to experience the Sambadromo parade during Carnival was an incredible experience, but if we had the opportunity to do it all over again we would make some tweaks. After traveling for 7 months, we did not have the energy nor desire to party for 4 straight days and when we did go to a bloco we found them to be overwhelming.

For longterm travelers, we would recommend going to the Champions parade that occurs the weekend after Carnival. The prices for the Champions Parade are cheaper and you will still see the best six schools. You will also be able to find cheaper accommodations that weekend than during Carnival. And, don’t worry, the party in Rio doesn’t stop just because Carnival is technically over, you’ll still be able to find people partying in the streets that weekend!

In sum by going to the Champions Parade, you get the bright colors, best performances of the parade, and Carnival atmosphere for a fraction of the price!

There you have it, our Sambadromo Rio Carnival tips. Until next time, happy adventuring!

All costs are current as of February 2020.